At CRVN we’re constantly trying to find new ways to bring you new content and connect with one another. Thank you to our wonderful members who continue to donate, spread CRVN’s mission and are sharing ways to enjoy vegan food, including by sharing their favorite vegan recipes. 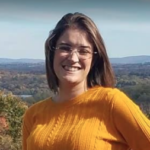 Star CRVN Member, Rachael I., has taken the time to share her expertise with us and walk us through a vegan seitan bacon recipe from The Vegan Wrapper. Watch her video, part II of her seitan series here. (Here is the first video, which talks all about seitan.)

Seitan is an excellent source of vegan protein, which sometimes can be a concern for many who are transitioning to a vegan diet. The world of vegan of food is extremely diverse and there are many opportunities to consume protein — seitan is just one of them!

If you’re looking for a recipe for veggie burgers to make to eat your vegan seitan with, check out CRVN’s Virtual Cooking Together beet and mushroom burger episode here.

A special congratulations goes out to Rachael as she was the winner of CRVN’s Virtual Vegan Cooking Competition with her dish for Vegan Comfort Food. You can see her winning entry on Capital Region Vegan Network’s Facebook page.

Seitan Recipe, as made by Rachael, from The Vegan Wrapper 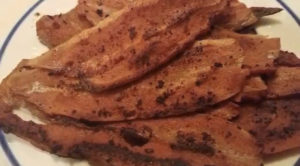 In a food processor add:

– Blend until smooth, add more coloring if need be.
– In a mixing bowl add 2 cups of Vital wheat gluten and then pour on the pink wet mix. Mix together to form a dough, get your hands in there!
– Leave the dough in the bowl for 30 mins for the gluten to absorb the flavors. This will be the “meat” of the bacon.
– Meanwhile add 1 cup of vital wheat gluten to another bowl, and add:
1 tsp salt
1 Tbsp oil
120 ml of water
– Mix together to form another dough, this one will be more rubbery and whitish in colour, this is going to be the “fat”! Set aside.
– Next break the large pink dough into small pieces and place them back into your food processor, with a dough blade attached, start to mix, I put about half of it in to start and then drop the other half in small pieces as it is blending (this part of the process is the same as making chickwheat) Blend until it all comes together into one piece, this can take up to 10 mins depending on your food processor. If it’s a small one then do it in 2 batches so as to not put too much strain on your processor!
– Break your Processed pink dough (which is now nice and warm and a bit sticky) into 4 pieces and shape them so they are about 1” thick, 6” long and 2-3” wide.
– Break the white “Fat” dough also into 4 pieces and stretch them out until they are big enough to cover the top of each of the 4 Pink pieces.
– Build your bacon, Pink on the bottom, Fat on top another piece of Pink on top and then finish with Fat on top. You should now have 2 built pieces of bacon.
– Wrap them both tightly in tinfoil and then again so you have 2 layers of foil. Steam in a steamer for 2 Hrs. *Note: Rachael has also tried this in an air fryer and that works too!
– Remove the foil and allow to cool, place them on a plate, cover them and refrigerate for at least 24hrs. This will make them much firmer.
– Slice the “bacon” as thinly as you can so that each piece looks like a slice of bacon. Next month I will be investing in an electric meat slicer for this!
– In a bowl mix together really well:
2 Tbsp Soy sauce
1 Tbsp Maple syrup
1 Tbsp oil
1 Tbsp Liquid smoke
1 Tbsp Nutritional yeast
1 tsp Onion powder.
– Paint each side of your sliced “bacon” slices with the above sauce and then fry them in a pan with a little oil.
Share Post: